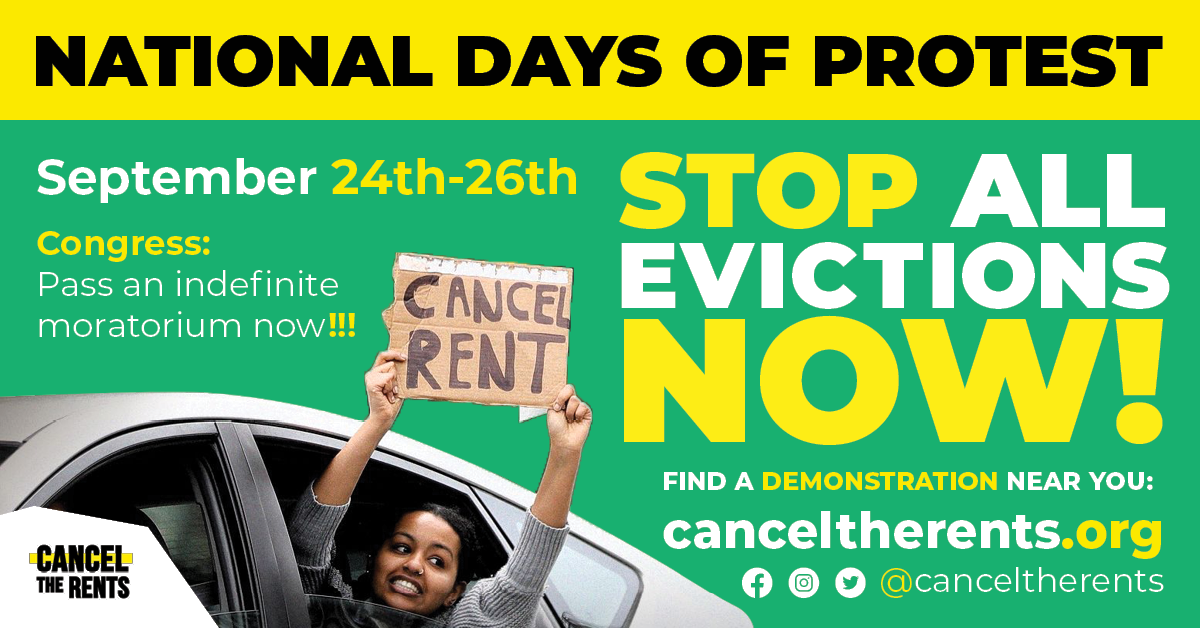 People across the country need to take action now to prevent millions of evictions in the middle of a resurgence of the pandemic. The U.S. government just marked Labor Day by cutting federal unemployment benefits for 7 million workers, which will immediately deepen poverty and compound the housing crisis. On September 24-26, join protests taking place nationwide to demand that:

The most recent eviction moratorium enacted by the CDC was cruelly struck down by order of the Supreme Court. The court’s majority opinion was explicit in its prioritization of profit over human lives. It argued, “Preventing [landlords] from evicting tenants who breach their leases intrudes on one of the most fundamental elements of property ownership—the right to exclude.” The court also expressed their fear that if the moratorium was allowed to stand then the government could also decide to mandate, “free grocery delivery to the homes of the sick or vulnerable.” The Supreme Court proved yet again that it is a tool for the rich and powerful to oppress the working class.

What is needed most urgently is for Congress to enact an indefinite moratorium on evictions and foreclosures that covers the entire country. An act of Congress would not be subject to a court challenge the way the CDC-issued moratorium was. An indefinite eviction freeze would provide stability for working class renters, mortgage holders and small landlords, and should be followed by the total cancellation of rent and mortgage debt accumulated during the pandemic.

Furthermore, according to the Treasury Department as of the end of July barely 10 percent of the $46.5 billion that has already been allocated for housing assistance had been distributed. Renters are bogged down by complex and unnecessary bureaucratic procedures -- distribution of aid must be massively expedited.

The intransigence of Republican members of Congress and right wing Democrats is no excuse for Congress to sit on its hands while an eviction crisis plays out. Protest can force them to act. This has already proven true for the presidency. After insisting for days that it was legally powerless to do anything to extend the eviction moratorium, the Biden administration did just that after a sit-in on the steps of Congress led by Rep. Cori Bush drew massive public support.

We need to build a powerful movement to win an indefinite moratorium that prevents 11 million people from being kicked out of their homes. But that alone will not resolve the situation. We need rent and mortgage cancellation to wipe out the mountain of debt that has accumulated amid the Coronavirus-induced economic crisis. The big corporations and banks have already been thoroughly bailed out by the government -- renters, mortgage holders and small landlords deserve the same kind of desperately-needed assistance.